You are here: Home / Coveted award for Hanmer Springs Thermal Pools and Spa

The awards were presented, by Minister for Tourism Kelvin Davis, at a gala evening in Parliament last night. They recognise excellence in sustainable visitor experiences.

Judges were looking for entries demonstrating excellence in visitor hosting and a commitment to Tiaki - Care for New Zealand, a tourism industry initiative to encourage travellers to care for people, place and culture while in New Zealand.

“Our business has grown from a simple pool next to a tin bathing shed to a multi-million dollar complex, we have never rested on our laurels and are currently building a $4.5 million development which will add five new thermal pools and an aquatic thrill ride to the complex.”

Graeme Abbot says the business strives to look after its community and environment.

“We also put enormous effort into conserving thermal water and have saved 58,000,000 litres in the past 12 months. This has largely been achieved through the use of a $200,000 building management system (BMS).”

“Our water is our life blood. Every drop is heated by the earth and infused with minerals that have anti-aging and pain-relieving benefits. It’s a natural process that scientists tell us takes 173 years, so we try not to waste a drop!” 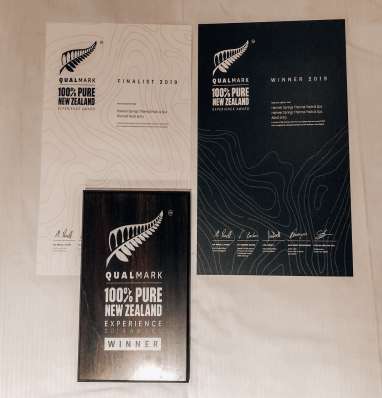